On a railway platform in Vienna two children, Emil 13 years and Alice 11 years stand waiting. It´s February 1939, and the children were sent on a transport to Sweden tohether with another 100 childern, in order to escape the Nazi persecution.

Emil and Alice didnt know each other then, but now, in the play TRACKS; they meet outside time and space, and speak of the life that was theirs and the consequences of Nazi ideas, thoughts and actions.

Every rail is singing.. Splinters of glass remain from the violence. Gravel remains, the hardend days. Letters remain, heavy as guilt. Europe is lined with rails, tracks, in all directions, leading nowhere, taking humans to their death or to their survival. All that shine is wear and tear.

Tracks is based on the authentic letters that parents sent to their children, from Nazi Germany to Sweden during the war, and on interviews with those refugee children. Tracks consists of minutes from one of the Nazi meetings in November 1938, which laid the foundation for the Holocaust.

TRACKS is translated into English by Marita Gochman.

It is also translated into Polish by Michał Piotrowski.

About the Swedish artists Isaac Grünewald, Sigrid Hjerén and their snesitive son Iván, and Art and Reality. For families.

About memory, and loss of memory, Dr Alzheimer himself, and about the present andr the past. The ageing father and his grown up daughter are the main charachters. Black humour.

All about Sweden (Tre lager ljus) – work in progress.

A preview of Tracks with was played at Folkteatern in Göteborg the 22nd september 2012. Director: Erik Ståhlberg 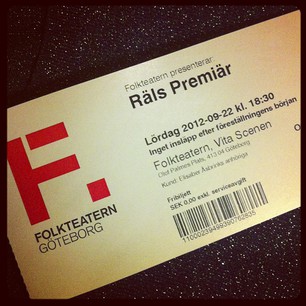